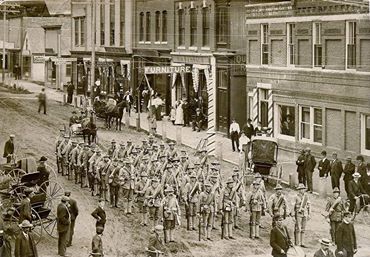 The war was brought very close to the hearts of the residents of Farmington, Maine. In addition to the hardships those left behind had to face during wartime, many were forced to part with their loved ones. Farmington had its own military company which saw action over the entire course of the United States’ involvement in the Great War. 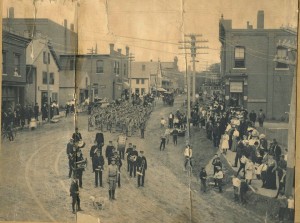 “Company K,” part of the 2nd Maine Infantry Division, was a member of the New England National Guard Company.  It was first organized on July 2, 1900, consisting of 47 men. While based in the town of Farmington, Maine, its members consisted of residents from surrounding towns in Franklin County as well. The company was constituted as a reserve group which prior to action had met monthly for drilling purposes.

The company’s first bit of action in the 20th century came in response to the call of border protection on the Mexican-United States border. Following orders given out by President Woodrow Wilson which mobilized nearly the entire National Guard, Company K and the rest of the 2nd Maine were mobilized on June 19, 1916, and by July 4 the regiment had arrived at its destination of Laredo, Texas where its job was to guard an area along the Rio Grande from Zapata to Apache Crossing.1 The regiment served as border patrol for nearly one year, until it was relieved of its duty and sent home.

This time spent at home was short lived. Only six days after the United States announced its entry into World War I on April 6, 1917, Company K was again mobilized.2nd Maine was assigned policing duties of bridges and railroads in the state in Bangor, Maine until mustered into federal service on August 6.> The regiment arrived at Camp Bartlett in Westfield, Massachusetts where it was renamed the 103rd U.S. Infantry Regiment and formed a part of the 26th “Yankee” Division of the American Expeditionary Forces (AEF). As a part of the 3rd Battalion, the members of Company K left for the European front from Hoboken, New Jersey on September 24, and arrived in Liverpool, England on October 12. They would not reach the war front until February of 1918.

This following poster was hand made by C.R. Tyler circa 1985, whose interest in Company K led him to making an astounding collection of the unit. It features key dates in Company K’s movement and shows the level of participation in the Great War that Farmington soldiers witnessed. 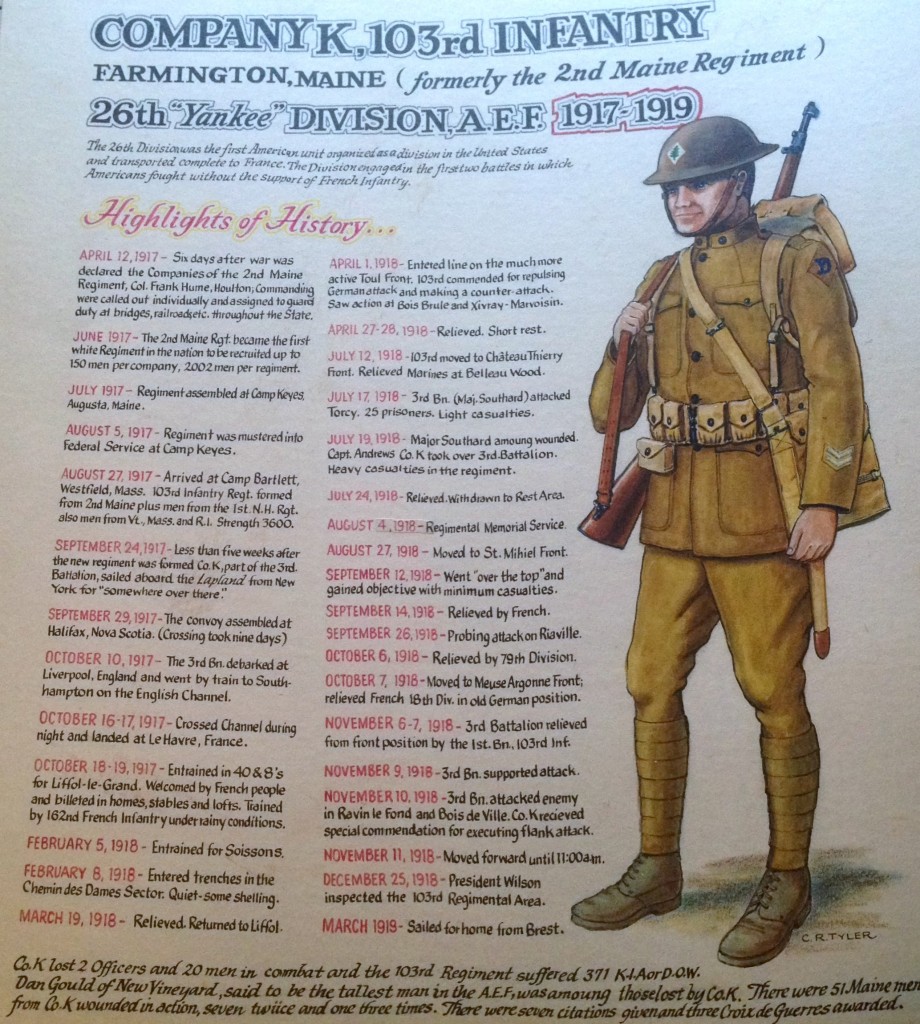 Some of the Activites by Co. K.

Animated Battle of the Marne Map

Members of Company K, as a part of the 3rd Battalion, were very active on the battle front, executing 70 movements during their time in France. They fought on a few different fronts, and participated in many essential battles. The company witnessed the most action on the Chateau-Thierry Front, where they participated in the battle of Torcy. The company participated in the Meuse-Argonne offensive. They were commended for their efforts in executing a flanking maneuver which allowed the regiment to move through Bois de Ville. The above image is an animated battle map: Since Company K was a part of the 26th Infantry Division, they would have been at the bottom central area.

Previous: Hardship on the Homefront
Next: Commemorating Those Who Served