Hardship on the Homefront

The effects of the Great War were felt well before the United States committed troops. The local newspapers began preaching of rising prices for goods, as well as food and fuel shortages in anticipation of hardships. There were two newspapers which circulated twice a week editions in 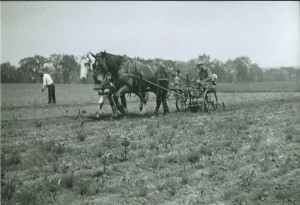 town, the Farmington Chronicle, and the Franklin Journal. The pressure was surely felt in Farmington, as the demand for food increased due to the United States supplying goods. This would only get worse when troops were committed and the men of Farmington and the surrounding towns were mustered into service.

Franklin County during the Great War was predominantly agricultural based. These communities consisted of small farms often family operated. The railroad, which had been introduced to the area in 1859, allowed farmers to expand their production. When the national government called for an increased focus on farming to provide food for the war, much stress was placed on the agricultural society in Farmington.

The Federal Farm Loan Act was passed in an effort to allow farmers to take out loans for internal improvements and purchasing necessary goods. The government set the loan repayment time from 5-40 years, and set the interest rates no higher than 6 percent.1 As the growing season began and the military was increased to full force, the Maine government met farmers’ demands by providing a credit in order to purchase “all seed needed” to meet the increase in demand.2

Additionally, only a few days after the United States’ entrance into the Great War, the pressure was put on farmers to produce a heavy surplus by maximizing their planting and using quality seeds.3 In response to fear of over production, the Maine Commission of Agriculture stated “It is a fact conceded by all who are studying conditions today that there is no immediate danger of over-production. If war continues, the farmers have their place in it and the popular demand is that they furnish the food to maintain health and strength, the same as normal times.”4 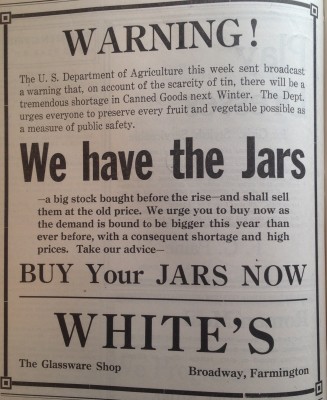 Ads in the newspaper displayed the severity of the war on Farmington as well. They reflected the call for conservation, and alerted the public to shortages in goods. One particular ad described the perceived shortfall in tin, and urged everyone to purchase tin early for canning season. Many Farmington companies used this strategy to increase sales, but the shortfalls were very real.

As the war continued, the national government continued to put the pressure on farmers to increase production and for citizens to conserve more food. Daily headlines portrayed the problem with titles such as, “Allies Need Food More Than Ever”5  or “Food Conservation Urged Upon Every Housekeeper.”6 The mix between mass production and mass conservation was difficult to maintain. Farming was considered a means of survival. To be asked to trade the welfare of their families in exchange for shipping off their goods in the name of patriotism was unsettling for many. This sentiment only worsened as the war dragged on. Another stress put on farmers was the loss of labor. Many farmers either volunteered or were drafted. When the men left for service, the demand for labor increased. This was often filled by the women and children left behind. In some cases, special exemptions were granted to combat labor shortages in order to keep men in the fields. But many women were expected to add farming to their job description during the war.

As the war continued into 1918 and the growing season was approaching, some women became vocal about their issues. In a Franklin Journal article titled “The Farmers Side of the Present Problem,” one wife lashed out at the unreasonable expectations. She said, ” How many farmers’ wives are there who do not have enough to do with the care of the home and children…Do you think for a moment that the farmer is going to plant crops, expecting his women folks to do the work of a man, to feed anyone but his own family…I think one and all should do what they can to help in this hour of need, but I should like to hear patriotism preached to some other class of people for a while and give us farmers a rest.”7 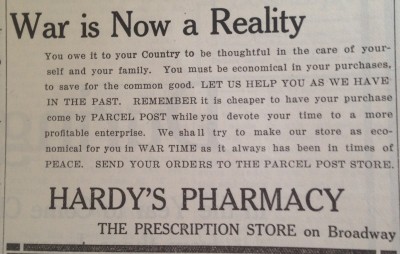 The national government called for its citizens to cut back on “luxury” foods as well. An article in the Franklin Journal described the “Patriotic call” for saving potatoes. It was suggested to save old potatoes to use as seed potatoes, and either buy new ones, or more preferably, use a substitute.8 Some went as far as saying “Potato eating is cradle-robbing. It is worse than cradle-robbing. Every potato on the market ought to be an ancestor, not food. A potato saved now may mean three full meals next October.”9 Another article in the Franklin Journal argued that people should crack down on “Kitchen waste in order to save the country money.”10 Many different conservation campaigns were started in Maine. An article in the Franklin Journal outlined a week-long campaign where students in school in Franklin County were handed out pledge cards and instructed to take them home to their mothers. These cards explained the importance of conserving food and the ill effects of wasting food.11 Maine Commissioner of Agriculture Sumner P. Mills issued a further call for conservation with his “Plant an Acre” campaign. in this, he argued that all citizens, regardless of age or occupation, can find free time to work in a garden.12 If all residents planted a garden, the food shortages would not be felt as heavily. With the increased need for food to support the war, the Commissioner hoped to decrease consumer demand by emphasizing self-sufficiency. 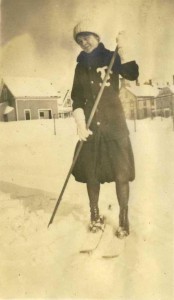 Farmington, Maine is located at the foothills of the Appalachian Mountains. The winters are very cold with heavy accumulation of snow. Residents of Farmington and the surrounding areas relied on coal or wood to heat their homes in the winter. With more than enough work to do on the farms, many resorted to purchasing their fuel for the winter. In both cases, the supplies were in short demand. Maine has a strong history of logging and an abundance of good timber for harvesting. Yet due to the labor demands for the war, the supply of wood plumetted. An article in the Franklin Journal titled “Logging Crops Short and Costly” outlined the shortfall in wood production due to labor needs.13  Coal was a precious commodity during the war, and severe shortages plagued the area. So much so, that one article in the Franklin Journal urged residents to buy coal for the winter in July, or will not be “guaranteed to stay warm next winter.”14