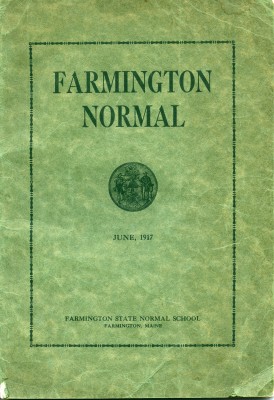 In an attempt to showcase campus happenings and student work, the biannual journal titled the Farmington Normal, was started.  Each issue provided campus happenings, editorials written by staff members, literature, poetry, and gossips sections, among others. This served as an opportunity for those participating to gain experience in journalism, kept students informed on current events, and showcased student achievements. The staff published two per year, one in March, and one during Commencement in June. The Farmington Normal was short lived, only publishing issues from 1914-1917.

The girls of Farmington State Normal School thoroughly enjoyed socializing. Many students joined clubs and campfires, and attended socials put together by the groups on campus. They threw socials for fundraising, either for their clubs or for charity, but most of all because they enjoyed the events. 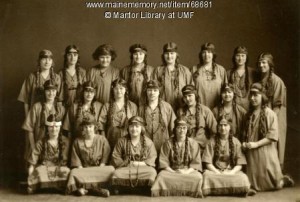 Campfire organizations sprouted at Farmington State Normal School as a way to enjoy extracurricular activities with friends and other students. By 1918 there were a number of different campfire groups on campus. Each differed in preferred activities and had different slogans and rituals.

The first campus organization of campfire girls was called the Soangetaha, and was formed in 1915. The group consisted of twenty students and was overseen by Miss Carolyn Stone.  The group used the term “Wohelo” as an expression, which stood for Work, Health, Love.* The demand for participation in the campfire groups was high, and shortly after the Soangetaha group was filled, the Pierpole campfire was started in the fall of 1915, and the Sobeyaka group in 1916.1

The Christian Association was by far the most popular and longstanding social group at the Normal School. The Christian Association usually constituted a majority of the students as members and was an integral part in fundraising. They held weekly meetings where they socialized, organized events, held prayer sessions, and discussed pertinent topics. They were by far the best at raising money, which they used for religious and charitable purposes.2 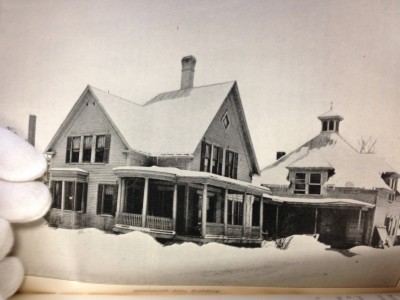 “The Cottage,” Home of the Household Arts program

Another group that developed during the period was the Home Economics Club. Home Economics was a trendy subject in Maine at the time. The Household Arts course had flourished in F.S.N.S. and other schools throughout the state, but also received increased funding under the Smith-Hughes Act which hoped to draw attention to vocational training. In 1916 a group of students started a Home Economics Club and met twice a week in the Household Arts building. The goals of this club was self improvement through increased practice and a means of social gathering.3