While the population of students from the Farmington State Normal School was predominantly women, they did their part to aid the war effort. As a school with a heavy emphasis on manual training and developing a household arts program, the students were able to best utilize their skills and resources by making goods for the Red Cross. Immediately upon hearing news of the United States’ entrance into the Great War, the students organized into groups, under the guidance of their teachers, and starting contributing to the war effort.1 There was a vast array of activities, and each group, social club, and individuals adopted their own techniques of contributing.

The Christian Association was very active in Red Cross support. The group donated over $200 over the span of the war to the Red Cross fund.2 Additionally, they organized events such as showing “moving pictures” and donating the proceeds to the Red Cross.3 They also put together social gatherings, such as a masquerade ball, where students dressed in creative costume.4 There were five Campfire Girls’ clubs during wartime.  Each had their own ways of fundraising and production. One Campfire put together a weekly ice cream sale, while others served luncheons.5 They donated their proceeds to the Christian Association to be put towards the Red Cross fund.

Additionally there were many students who took it upon themselves to contribute to the Red Cross.6 One student posted advertisements offering 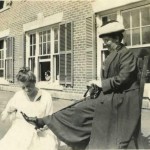 to shampoo or shine shoes for money, which she would donate. Another offered to sew buttons. Some collected and resold old newspapers and magazines. One girl had a more creative business enterprise: she went around the dormitories collecting rubber boots, most often those who belonged to other students, and selling them for profit.

The most important activity was the organization into groups which made goods for Red Cross care packages. The students divided themselves into groups of twenty and created necessary resources to be sent to the battle front.7 They made ambulance and fracture pillows, bandages, wash cloths, sponges, and other goods. Overall, over a two year period the school produced 5,010 articles which were sent over and raised roughly $1,350 which was either sent over or used to buy supplies. Additionally the Normal school was an integral part in the development of the Franklin County chapter of the Red Cross.

The Maine School Report was an annual publication written by the State Superintendent which provided information from the prior year about all primary to post-secondary public schools in Maine.8 The Report for the 1917-18 school year highlighted a strategy implemented to best utilize school work in aiding the war effort. One section pertinent to F.S.N.S. was the modification of work in response to war demands. In the report, the state called for help by utilizing their existing curriculum. Additionally, the Superintendent stressed patriotism in schools. He stated:

“In lessons in current history the cause of the war and the various stages of its progress were carefully followed until pupils became familiar, not only with the passing events but with a new enthusiasm for the institutions of liberty for which our country stands. It was recommended by the States’ Superintendent that all of the schools take up lessons of this sort touching on the points of American history bearing upon the development of our Republic, that no school be without a flag, that the different between an autocracy and a democracy be exemplified.”9

The curriculum at the Normal School did not change as a result of the emphasis on patriotism, because there were already well developed courses on subjects such as American history, government, and civics. A small change was made in the annual catalogue and circular, which under the “Expenses” section starting in 1916 stated that “The price of board is not guaranteed because of war conditions.”10 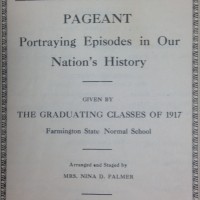 In showing their patriotism, groups on campus put together various socials with patriotic themes. The graduating class of 1917 put together a “Patriotic Pageant,” held June 20, 1917.11 This was a program which portrayed historic events and characters. This particular event acted out scenes of the American Revolution and gatherings of the Founding Fathers and other historical figures. In June of 1918, there was more formal “Patriotic Mass Meeting” which was a part of a nation-wide series held by the National Committee on the Churches and the Moral Aims of the War.12 This event featured singing of patriotic songs and speeches given by members of the church and military.

Although F.S.N.S. was overwhelmingly populated by women, there were men in attendance as well. During the school year ending in Spring of 1917, there were three men enrolled: Ralph G. Oakes of Farmington Falls, Howard S. Emery of Bar Harbor, and Thaddeus Roderick of Farmington.13 Although the number of men attending the school was small, the war certainly attributed to a decline in attendance among men and women.14 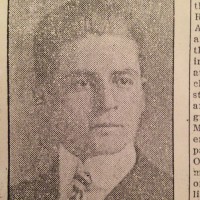 Of the three male students to graduate in 1917, two of them were members of the service, while the other went on the University of Maine for a four-year degree. As indicated in the 1918 catalog and annual circular, Howard S. Emery of Bar Harbor, Maine was a member of the U.S. Navy. Thaddeus Roderick of Farmington was a member of Company K and the 103rd Infantry. He was deployed shortly after the commencement ceremony. Roderick was one of the few casualties Farmington witnessed, dying of wounds on September 18, 1918.15

Previous: Curriculum
Next: Life in Farmington